Have you ever looked at a beautiful Java stream sequence and wondered how is it implemented? or wondered how is it possible to implement something similar, with declarative and fluent API with the ability to switch the execution model from sequential to parallel for any data source by changing just a method call? I sure have, and today I will try to explain how the overall plumbing of the API works, and some of the notable places you might want to take a closer look at, This post is going to be harder to grasp (If you’ve never seen this before yourself), I’d suggest you get an IDE open, a cup of tea/coffee and try to read it twice, and stop and look at the JDK’s source code the moment it stops making sense.

Before starting we start looking at streams, I think we should start at the the foundation of what made streams easily parallelizable, because in my opinion that wouldn’t have been the case if the Java architects (Brian correct if I am wrong here) decided to build on the famous Iterator<E> API.

Spliterator<E> is a nice data container with the special ability to split when the runtime can see fit.

The Spliterator<E> API has no relation to the Iterator<E> one, it offers a bunch of methods, but we will be most interested in 3: 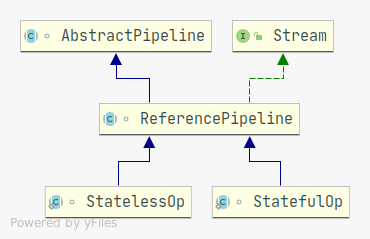 Disclaimer: I may use the words: stream and pipeline interchangeably.

Every pipeline instance keeps track of (omitting some for brevity):

There are two special implementations of the ReferencePipeline that are worth pausing to look at:

Intermediate operations inside a stream can be split into 2 categories:

Now that we looked at the major component in the stream API, let’s explore how the data flows through the System, and to make it simple, let’s use an example for reference:

In this simple example, we want to transform all the String elements to integers and only keep the ones that are even and then print the result.

Keep in mind that without actually calling the forEach terminal operator, the Stream won’t perform any operation, hence the laziness.

Note: The JDK comes with a bunch of Spliterator implementations that are very good for most use cases (in this example it’s the ArraySpliterator<E> that was used), but nothing is stopping you from creating your own, and creating a stream out of it is as simple as calling StreamSupport#stream.

Above I mentioned that execution starts only when the terminal operator is called, which means that from the last operator we see the stages in reverse order, i.e:

with the arrow representing a parent relationship, but we need to execute the operations in reverse order, i.e:

Now, what we need to understand is that calling the forEach method on a sequential stream will call an internal method called evaluateSequential, and this method will flip the stream nodes by walking the stream nodes backwards and linking it in the order we expected to execute before performing the actual operations on the underlying data source. here is the piece of code that performs this operation:

Let’s look at the map and filter examples.

Calling opWrapSink on the Sink representing the map operation in [1] will create a ChainedReference which is nothing moew than a Sink that has a reference to the next Sink just like a linked list.

The accept operation is where the actual operator logic resides, in this case, map takes a function and applies it to the current element and that’s exactly what the mapper.apply(u) call is for.

Also, notice that the result is not returned, but it’s passed as a parameter to a downstream, which is the next Sink in the pipeline, in this case the filter operator.

The filter operator implementation is similar, but this time, depending on the result of the predicate (A Predicate is a function that given an element returns true or false) will determine whether to push the element down the pipeline or not.

Confused? Let’s try another example, this time with a StatefulOp.

The distinct operator is essentially doing the same thing, but as you can see there are some differences:

Flags are invisible to the user of the stream API, but they can be very helpful for the underlying stream framework, to control and optimize computations.

Internally each stream operation will hold a bitmask (i.e an integer) that represents the current characteristics of the current stream, this value is carried out and changed through successive operations applied to the stream parts, let’s look at an example:

The sorted operation sorts the elements of the stream then pushes them to the downstream in sorted Natural order, but it also sets the bit (or the Flag) that marks the current output stream as SORTED so that information can be used in later operation to optimize execution speed or memory usage.

This is the implementation of the sorted operator in the OfRef<T> class, a couple of things worth looking into here:

The stream framework is doing very nice optimizations to relieve the developer from having to think about such details and only worry about what he is trying to achieve.

If this still looks confusing, let’s take a look at another operator: distinct.

The constructor of the class as before makes sure that next operations knows that the resulting stream from this operation is DISTINCT, what’s new here is that it also passes a new flag NOT_SIZED, this flag clears the IS_SIZED flag, i.e next operations won’t see the resulting a stream as having a size, this is simply because if there are duplicates in the values of the stream, the source size is going to change and attempts to use the old size of the source stream will result in erroneous operations.

You can not also that if the stream is already marked as DISTINCT just like before, nothing is performed, but if it’s sorted, we know that we can make it distinct by using O(1) extra memory, otherwise we fall back to a Set based approach.

From above I hope that you now have a better understanding of Flags and how is the Stream API is making a lot of the optimizations on your behalf so that you can focus on what you do best.

The Stream API is a nice piece of software that is well designed, and tested, and one can learn a lot of things when reading the underlying code, not everybody should do that of course, but it’s a nice learning experience.

In this post we talked in terms of Sequential execution, In another post we will take a look at how the API handles Parallel execution, what are the challenges that the designers faced? and how did they overcome them?

Read other posts
← Distributed systems chronicles: Key value store (1) - Architecture and Protocol Why I like rust →